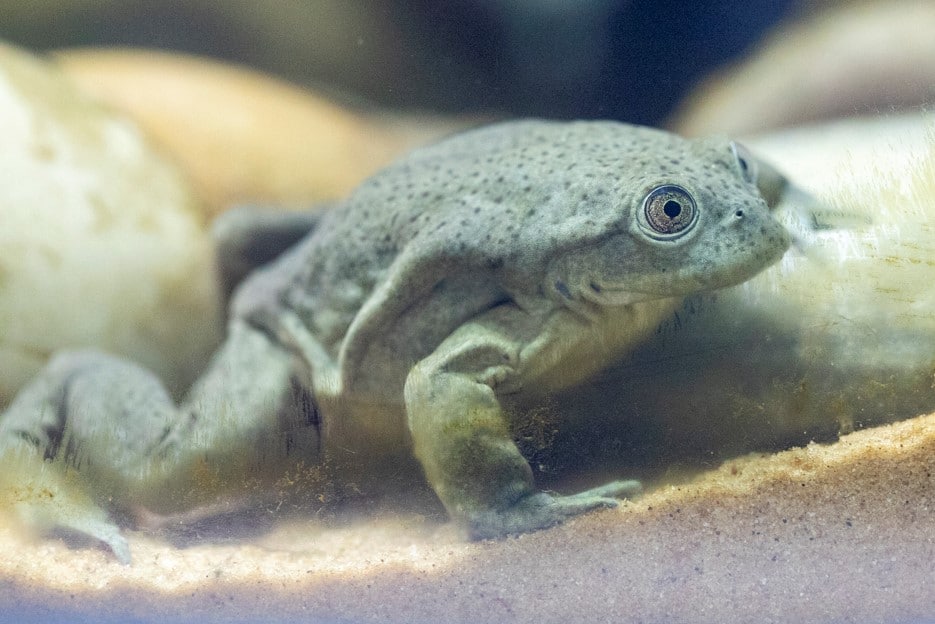 At the start of July, Paignton Zoo became one of only a few collections in the UK to house Lake Titicaca water frogs. The frogs were kindly donated by Slimbridge Wetland Centre.

The Endangered aquatic frogs are from a large, deep, freshwater lake in the Andes, on the border of Bolivia and Peru: Lake Titicaca. This is one of South America’s largest lakes, said to be the birthplace of the Incas.

Lake Titicaca water frogs live in the deep waters of the lake and breathe underwater through the folds of skin that cover their body. The exclusively aquatic species have a notable wrinkled appearance that helps them to absorb more oxygen from the water.

Found in Amphibian Ark at Paignton Zoo, the frogs have laid clutches of fertile eggs that have recently started to hatch. This is good news for the fast-declining species, which has reduced in numbers by as much as 80% over the past 15 years.

Dr Katy Upton, Team Leader of Lower Vertebrates and Invertebrates at Paignton Zoo, said: “This species is a great addition to our amphibians here. They were brought into the UK for the first time ever a few years ago and are Endangered. They are an extremely unusual species that have been getting a lot of interest from our guests. We’re really excited to watch our group of frogs grow thanks to the arrival of multiple clutches of eggs – some of which have already hatched into tadpoles. The LVI team have done a great job in looking after these frogs, which have very specific water parameters, and quickly setting up a new enclosure for their tadpoles.”

In the wild, Lake Titicaca water frogs are threatened due to their use in a Peruvian medicinal drink, known as ‘frog juice’, which is said to cure a variety of ailments including asthma and rheumatism. It is also sold as an aphrodisiac, consumed by blending the skinned frog with ingredients such as honey. There is no scientific evidence for the efficacy of this drink. Another threat to the species is pollution; in 2016, they made headlines when nearly 10,000 of them were discovered dead in the water near Lake Titicaca, most likely due to pollution and runoff from agriculture and mining.