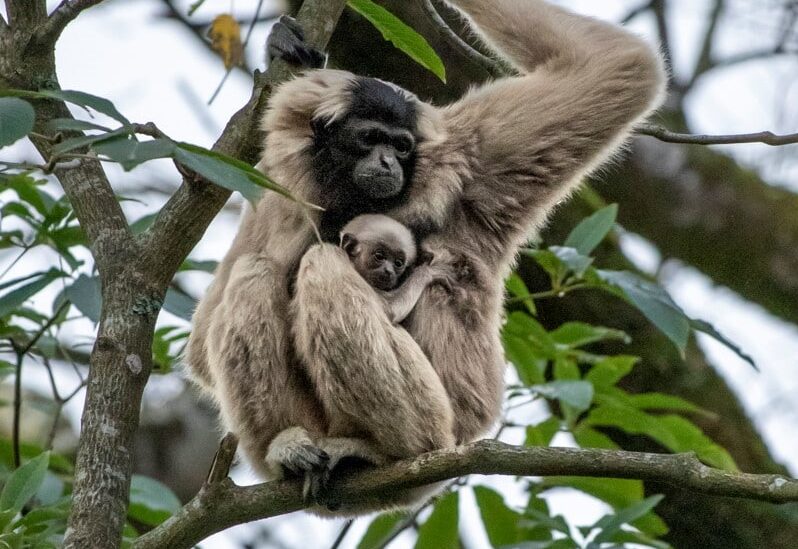 Paignton Zoo are excited to announce the birth of an Endangered pileated gibbon. One of four UK zoos to house the species, the baby was born to mother Shukdi and father Hantu on 26th September. This is not the first offspring for Shukdi and Hantu; the pair also have two sons who also live at Paignton Zoo – Sunan, 5, and Nimith, 2.

Pileated gibbons can only be found in tropical forests and dense evergreens of southeast Thailand and northwest Cambodia. Most of their diet consists of fruit, however they occasionally eat leaves and insects too. Males of the species have entirely black fur, while females and young have white–grey fur, with black on their heads and stomachs. Gibbons are very agile and swing through the trees at speeds up to 35mph.

There are thought to be around 47,000 mature pileated gibbons left today. This Endangered species has experienced a reduction of more than 50% over the past 45 years as a results of habitat loss, with the wild forests they inhabit being converted into farmland. In Thailand, all populations of pileated gibbon are protected, but hunting for the species remains uncontrolled. Habitat loss is an imminent threat to Cambodian populations due to a lack of protected areas.

Now a family of five, Paignton Zoo’s pileated gibbons are part of the EAZA ex-situ breeding programme for the species. The baby, who has yet to be named, can be seen holding onto its mother at their lakeside home.

Paignton Zoo is part of Wild Planet Trust, a conservation and education charity that works to protect biodiversity and help halt species decline.