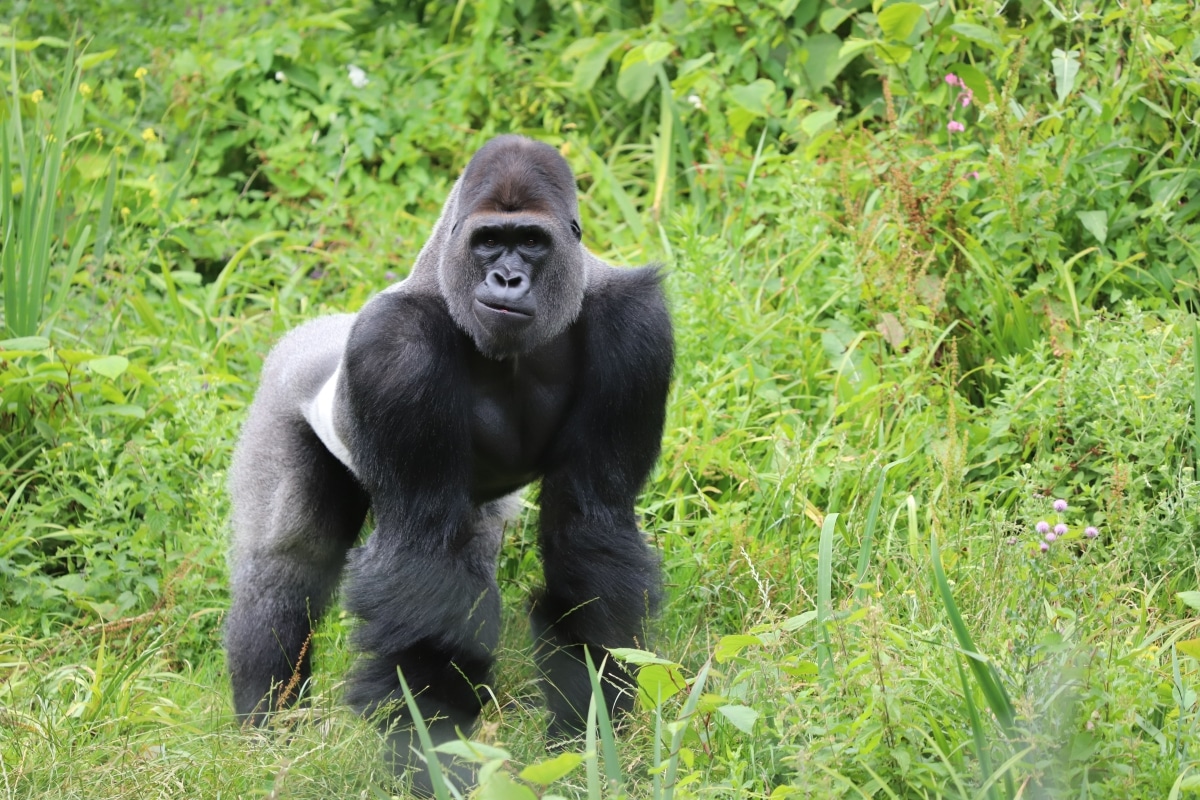 To celebrate and raise awareness of World Gorilla Day on Thursday 24th September, we have put together a short blog so that you can learn more about our incredible Western lowland gorillas here at the zoo.

Part of the great ape family, along with orang-utans, bonobos and chimpanzees, gorillas are some of our closest animal relatives. Living in the Ape Centre at the zoo are our bachelor group of four male Western lowland gorillas. This species can be distinguished from other gorilla subspecies by their slightly smaller size, auburn chests and coats that are a mix of brown, black and grey. Male gorillas can weigh up to an impressive 200 kgs.

The eldest gorilla is Pertinax, who is a fond favourite of many zoo supporters and regular guests. He is 38 years of age and has been at the zoo since 1997.
Pertinax has helped to raise three different bachelor groups at the zoo and now enjoys a quieter life in his ‘retirement’. Though he no longer lives directly with the other boys, he is still very much part of the group and enjoys communicating with the others, especially at feeding time.
With any new ape keepers, Pertinax can be grumpy and stand-offish at first, but after some time can be won over to reveal his ‘softer side’.

Having just turned 17 years of age, N’Dowe is the youngest gorilla but is also the bossiest!
He is a very intelligent ape that picks up training and figuring out new enrichment very quickly. N’Dowe can show a stubborn streak and is often happiest when he has a blanket and plenty of food. Despite this, he is very gentle towards his keepers.

Next is Kiondo (also 17 years old), who is full brother to N’Dowe and a half-brother to Kivu. Kiondo is well-known for playing ‘Jurgen’ in CBBC TV programme ‘The Zoo’.
He can be quite shy initially, but once he comes out of his shell he becomes a bit of a show-off, especially when guests are around! Kiondo is very fond of browse and will happily climb to high parts on the outdoor island to get the tastiest parts.

Lastly is handsome Kivu, who is also known as the ‘ladies’ man’ of our troop.
Kivu (also 17 years old) has the darkest black fur across his head and takes very good care of his appearance, regularly self-grooming.
He is a cheeky gorilla who will also poke his tongue out when concentrating.

Gorillas are typically herbivores and their diet at the zoo reflects this. They eat pellet, a variety of vegetables including peppers, cucumbers and sweet potatoes and browse – their favourite is willow. The boys are often very particular characters and will only venture outside on their island if there is food for them to forage for or if the weather is of optimum conditions for their preference – dry, but not too warm or too cold.

Today, the Western lowland gorilla is classified as one of the world’s Critically Endangered species. Native to remote rainforests in countries in Central Africa, such as Cameroon, Gabon and the Democratic Republic of Congo, it is not known exactly how many Western lowland gorillas are in the wild today. However, it is widely accepted that the wild population is on the decline, due to the severe threats of poaching and disease.

Conservation education programmes and eco-tourism initiatives are being developed to encourage the protection of gorillas in their wild habitats. There is also a European Endangered species breeding programme (EEP) within zoos for this species of gorilla and our boys are great ambassadors.
The gorillas are one of the animals that supporters can adopt. Full details on adopting a gorilla can be found here.